Despite my love for British comedy and quite a big stash of PTO days, I never found the time to hop across the pond to the UK before meeting Adam. Between his love for history, and my love for Hyacinth, England was our top pick for a honeymoon destination.

My only regret about our honeymoon was that we chose to go immediately after the wedding, and so I landed with a horrible cold and no energy. That said, I did my best to drink tea aplenty to power through jolly old London.

The Hotel: Thanks to an awesome deal on Hotels.com (client), we picked a lovely Taj property called The St. James Court Hotel. Located in the St. James Park area and nestled smack-dab in the middle of Buckingham Gate, the hotel was pretty perfect. The staff was super hospitable, and the room was very comfortable. We had a small balcony which overlooked a stunning Indian-inspired courtyard, with outdoor seating for one of the hotel’s restaurants. We had breakfast at the hotel daily, and it was delicious most days. There were a few over-cooked poached eggs, but when they didn’t charge me for a side of avocado to mash into my toast, I decided it was a fair exchange. We also had tea here quite a bit, splurging once on the afternoon tea package. I would most definitely stay at The St. James Court again, especially if we could snag a room in a similar location on the property.

The Food: I was actually really surprised by the food in London. It was incredible. We had the world’s best fish and chips at a chippy in Notting Hill called The Fish House, Ben’s Cookies, afternoon tea at The Orangery with a view of Kensington Palace that was beyond charming, and the most delectable Indian food I’ve ever tasted at Bombay Brassiere (get the fried spinach appetizer. Just do it). One of our favorite spots – we went twice, including right before heading to Paddington to catch the Heathrow Express for our return flight – was called Herman Ze German. It was a small little bratwurst place with the best-ever (you’ve heard that a lot in this paragraph) veggie sausage I’ve ever sampled. I loved HZG so much so that I ordered an apron and bought a tote bag while we were in London. The only culinary let-down in London was NOPI, a Yotam Ottolenghi restaurant. Most of the food was over-seasoned. I just felt that for a chef who sells such beautiful cookbooks full of super complicated recipes, his restaurant should have been spot-on.

The Sights: Would it be a total waste for me to admit that the Harry Potter “Platform 9 3/4” attraction at Kings Cross was one of my favorites? I was really into the Tower of London, and not for the jewels, but for the amazing tour guide. The British Museum and The Churchill War Rooms were Adam’s favorites, but I have zero attention span when not engaged in a tour, so I zoomed through both. I loved walking around the gardens at Kensington Palace, as well as strolling down Portobello Road in Notting Hill.

Leaving London, I already had such a strong urge to return. There’s so much left to see and experience, and I hope to make a trip back soon. 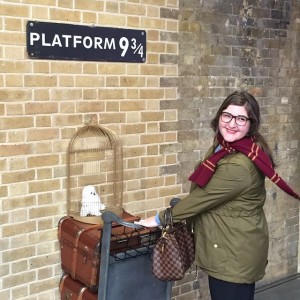