As of last Friday, I’m another year older. In two days, I’ll be one year and a week older. I feel older, but I don’t know that I feel wiser. Birthdays are funny in that way. As a kid, I treated my birthday as a social event. Naturally, back then I couldn’t flex my type-A planning talent, and my parents took the reins on planning. When I hit high school, I placed equal – albeit more controlled – importance on my day. My grandparents also contributed to my annual one-day sense of entitlement. They treated us, each of their 10 grandchildren, to “special days” – daylong shopping trips with lunch. I remember one year (4th grade, if I remember correctly) I opted for a Barbie (the FAO Schwarz Barbie) instead of a more mature option: pearl earrings.

This year, I did the 26-year-old equivalent of a Barbie trade. Adam offered to throw me a happy hour. He lives to surprise me. He even made a Facebook event (in my world – a world that’s dictated by social media engagement and activity – that’s a big deal). And, in classic Kirsch form, I decided that because it was out of my control, I didn’t want it. Even with a wedding on the way, the idea of being the center of attention is far less appealing in my personal life versus my professional life. We’ve had so many milestones in the past year, that I’m kind of celebrated out. So, instead of a happy hour, we did something that removed us far from the center. We attended a Knicks game, along with hundreds (maybe thousands, I’m not good at guessing these sorts of things) of other New Yorkers and the like. Hank Azaria was there, too. So that was something. 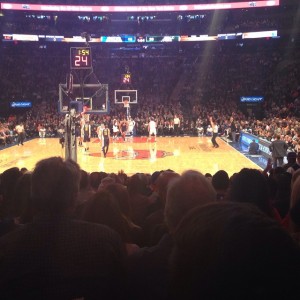 I spent my birthday exactly how I wanted. I feel like that’s how it should be. I should be able to control my day, after all. I took the day off of work (which is hard when you love your job as much as I love mine), ate a solo lunch at Il Bambino (their crostini are delectable – get the olive spread, and you’ll have no regrets), hopped over for a mani/pedi at Kiki’s (it turns out that a spa pedicure is totally worth the up-charge), and perused the newly opened Lockwood Style, sister shop to Lockwood on 33rd Street in Astoria.

Maybe I’ll feel different in 2015. I don’t know. Until then, I’m grateful for the well-wishes, the macarons from my colleagues, the perfume from a dear friend, the cards and all other tchotchkes. Would I be deemed ungrateful if I said I could have done without the cold?